POE switch is designed to offer both network connection and power supply to one PoE powered device (PD) through one Ethernet cable. And as the demand for deploying PD devices such as IP phones, IP cameras and access points increases, PoE switch is commonly used in today’s enterprise and campus networks for it helps to reduce deployment complexity and cost. Now we can see there are both active PoE switch and passive PoE switch sold in the market. What exactly are they? Should we use active PoE or passive PoE switches for our network?

Active PoE, short for active Power over Ethernet, is also known as standard PoE which refers to any type of PoE that negotiates the proper voltage between the power supply equipment (PSE) and the PD device. Active PoE switch is a device that complies with standard PoE, so it is also named standard PoE switch. This type of switch is rated to be IEEE 802.3af, IEEE 802.3at or IEEE 802.3bt compliant. Thus it can be further divided into PoE, PoE+ and PoE++ switches. Before powering up, the active PoE switch will test and check to ensure the electrical power is compatible between the switch and the remote device. If it isn’t, the active PoE switch will not deliver power, preventing any potential damage to the non-PoE device. 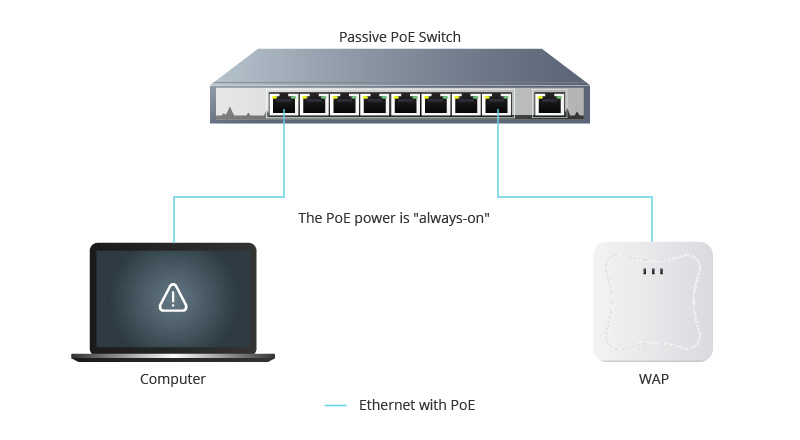 Active vs. Passive PoE Switch: What Are Their Differences?

As mentioned above, active PoE switch and passive PoE switch can both provide PoE connections but in very different ways. Besides that, they also differ in PoE power supply pinout, Ethernet support, cost, etc.

To sum up, active and passive PoE switches mainly differ from each other from the following aspects:

Active vs. Passive PoE Switch: Which to Choose?

Want to join the discussion?
Feel free to contribute!

How to choose a right optical transceiver ?

How to choose between PoE, PoE+ and UPoE (POE++) switches ?
Scroll to top